The Fascinating Origins of Christmas Traditions

Stuffed turkey, cod stew, romeritos, and gifts! If this sounds like the perfect Christmas combo for you but you don’t know anything about the reason why these are traditional holiday recipes or the actual meaning of giving presents, we’ve got you covered.

Even though each country celebrates Christmas with different dishes, they all share the same meaning: love, joy, and happiness.

According to tradition, the most important part of the Christmas dinner is not the food itself but the quality time spent with our loved ones. Different dishes are prepared in each country. For example, turkey is often the main dish in the United States, while vitel toné and salads are a must in Argentina. When it comes to desserts, buñuelos are traditional in Spain, while turrón is king in Colombia and Italy.

Here is everything you need to know about the origin of some of the traditional Christmas recipes prepared in Mexico:

Besides being prepared for Christmas, this dish from the Mexican state of Veracruz is also a staple during Holy Week because of Lent.

Even though it is not a traditional Mexican dish, turkey has been spiced up with Mexican flavors by adding ground beef, vegetables, raisins, and almonds.

This dish is indigenous to Mexico City. It is said to have been a favorite among the Aztec due to the number of nutrients contained in quelites, mole sauce, and nopales. Besides being a classic Christmas dish, romeritos are also prepared during the Holy Week.

An Aztec beverage, atole is widely consumed during the winter season since its texture and temperature make it ideal for pairing it with other traditional dishes like tamales.

The ideal drink to pair with dessert. Champurrado is a corn-based atole with piloncillo, dark chocolate, water, and a touch of vanilla. It must be brought to a boil to obtain the proper texture. This is another Aztec drink and it is delicious.

This drink is obtained through the fermentation of apple juice. There is evidence that cider was consumed by the Greek, Egyptian, and Hebrew peoples. Mexico inherited the tradition from the Spanish and it is still produced un Huejotzingo and Zacatlán de las Manzanas in Puebla.

2. The Christmas Tree and related ornaments

Ornaments and symbolism are a must during this season of the year. It is also the perfect time for making crafts with our loved ones. One of the most important elements during this season is the Christmas tree, which is decorated with different ornaments and red, white, and golden baubles. Another Christmas staple is the Advent wreath, whose 4 candles are the symbol of the 4 weeks before December 25.

Some sources assert that the first Nativity scene was set in the year 345, in a grave in Letran, during the Christian era. However, this tradition was started by Saint Francis of Assisi in Italy in 1223, who insisted on the activity becoming a Christmas tradition. Friars brought this tradition to Mexico and it became mainstream in the rest of the world in the 15th century.

The tradition of Christmas gifts represents the act of giving and receiving. It is one of the most special and expected moments of the season for many. Is it for you?

Learn how to lay the perfect Christmas table with this quick guide:

Everything You Need to Know About Gluten
Leer en españolIn recent years, a lot of people have said goodbye to foods with gluten, regardless of whether they suffer from celiac disease or not, because of all the negative information around this substance. Keep reading to find out more about the myths and facts of this protein so that you can choose wisely whether you hop on the gluten-free diet or not. What Is Gluten? Gluten is a protein that is contained in many kinds of cereal, like wheat, barley, and rye, as well as foods like pasta, bread, pizza, and soy sauce, among others. Those with celiac disease cannot eat food with gluten because it causes them swelling, intestinal damage, and other reactions in their bodies. Who Should Follow a Gluten-Free Diet? According to Harvard’s School of Medicine, those who must avoid food with gluten are the ones who suffer from celiac disease as it is fundamental to stay healthy.On the other hand, some people might not be allergic to gluten but are gluten intolerant. These people show symptoms like inflammation, diarrhea, and stomachaches when they eat food with this protein.Therefore, there are two groups of people who should stick to a gluten-free diet: Those with celiac disease and those who show pain or discomfort after eating food with gluten. In any case, it is best to seek medical advice to determine whether someone can eat gluten or not. What Is Wrong with Gluten?According to experts, gluten is not so bad, as there is no current scientific research that shows that eating gluten-free foods will improve someone’s health or will help prevent several diseases.Is It Wrong to Stop Eating Gluten?Although this kind of diet has multiple health benefits for certain people, not eating gluten could harm your health because these foods contain vitamins and minerals like iron and folic acid. In addition to this, experts from Harvard University assert that gluten-free food contains more sugar and fat and less fiber. Moreover, recent studies point out that those who follow gluten-free meal plans gain weight.The Health Benefits of Gluten Even though it has become a trend to eat gluten-free foods, which are more expensive, scientific studies have confirmed the health benefits of gluten. A study published in 2017, that included 100,000 people non-allergic to gluten, found no evidence that a diet with gluten was linked to heart diseases. On the contrary, the study asserts that those who do not eat food with gluten have a higher risk of heart diseases.On top of that, several studies have linked eating cereal to better health. Those who eat more whole grains are less likely to develop type 2 diabetes, strokes, and other heart diseases.Now that you know gluten is not as bad as it seems, and if you are sure that you suffer from celiac disease or are gluten-intolerant, then you should avoid this protein. In this case, it is best to seek expert advice and to keep a healthy diet rich in vegetables, fruits, protein, legumes, grains, nuts, and animal protein, as well as gluten-free foods, like quinoa, brown rice, amaranth, maize, oats, and buckwheat. Read more: The Surprising Benefits of Cabbage Gluten-Free Recipes Kiwilimón cares about your health, which is why we have a wide selection of gluten-free recipes for any occasion. You must try them!Gluten-free desserts Gluten-free bread Gluten-free recipes Gluten-free sidesTranslated by Miranda Perea 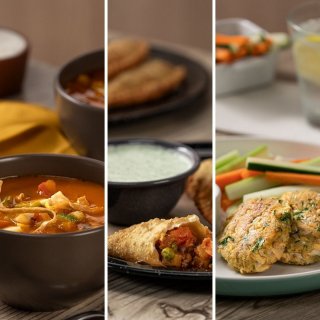